Time for Some TLC

Time for Some TLC. For the bikes, that is. We thought dropping them off for
oil changes yesterday afternoon would be sufficient.

Grim, my trike, has decided to collapse the springs in the primary. As it
turns out, no dealer in Alaska has any in stock and it’s on backorder
through Harley. So the bolts been torqued down a bit and we’ll be watching
for symptoms and hoping for the best along the way.

Strydr, Michele’s bike, has run through the tread on the tires quicker than
usual. Lots of chip seal road surface out this way and that just chews
through the softer, stickier tires preferred for the Colorado twisties. The
Anchorage dealer doesn’t have in stock the tire she wanted to use, but the
one in Soldotna does. Michele has taken off on her first solo Alaskan
adventure and is riding down to Soldotna ahead of us.

Why aren’t Doug and I riding with her if Grim’s issue is a
“cross-the-fingers-and-ride-on” type?

After all the attention the other two bikes were getting, Dusty, Doug’s
high-maintenance stripper bike, decided to throw a hissy fit and is no
longer talking to him. No radio, no CB. So she’s back up on a rack at the
Anchorage dealer to see what they can see. 4,500-ish more miles to go.
Those will be very long miles without music or the ability to easily
communicate. On the other hand, perhaps not hearing the two chicks yapping
in his ears could be a welcome thing. :p

So, here I sit, alone, at the hotel’s Fancy Moose Lounge outside on the
deck watching the float planes land and take off. Grim’s in the lot with
Brr, Grr, and two bike’s worth of stuff until Doug gets here with Dusty.

Amy, the service writer at the House of Harley here in Anchorage, has been
fabulous. From setting up the oil changes months in advance, to
accomodating our traveling schedule, to settung up the tire change for
Michele in Soldotna. She probably thinks I’m crazy. I was laughing as she
was telling me about the primary via the phone last night. It’s always
something but compared to the issues we’ve had on past trips, we’ll, let’s
just say that at least no one’s yet had to buy a whole new bike and leave
it at that.

Happily, at the end of today lies the Homer Spit, the Land’s End Resort
hotel for two nights, the Salty Dog Saloon, and some quality off bike time. 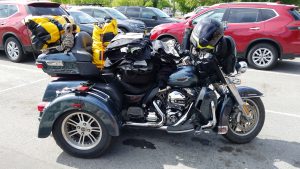 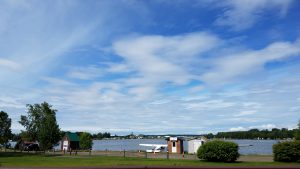